Film (Horror)
Patricia Ann Conte
After being murdered by his own step-brother and conspirators, the ghost of CHRIS BLOCK (17) avenges his death. 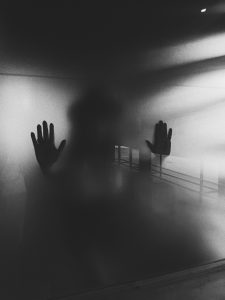 Ashes 2 Ashes© (Horror) A John Hughesesque feel with a naughty nemesis and a vengeful ghost!

CHRIS BLOCK (17)  and TRISH HEART (17) are the ‘it’ couple of Beaumont High School.  They are popular and well-liked by fellow classmates – save one, Chris’ very own step-brother, DEREK WALKER.

Derek’s paternal father was killed in a robbery gone wrong.  Derek resents his step-father, PATRICK, and his “Mr. Rogers” persona.  Patrick favors Chris, subtly, but enough to make Derek lash out in spite when he discovers that Patrick has arranged to pay for Chris’ college education, but not his own.  Derek’s mom, ERIN, tries to reassure Derek that Patrick loves both boys equally, but she knows deep down this isn’t true.

Derek is jealous of Chris on multiple levels: he wants to be him, have his physique and dating status.  He wants Trish for his own. In an attempt to quell Chris’ happiness on prom night, Derek (along with conspirators, SERENA, RAY and VICKY) tamper with Chris’ brake lines. (Vicky has a crush on Derek and allows herself to be used for his convenience.)

After the prom, Chris and Trish decide to drive off to the beach for an evening of romance.  They arrive safely at the beach (the fluid has been leaking out all night little by little) and dance under the moonlight.  Chris swears an oath that if anyone tries to come between their love, he would inflict a curse on that person(s). Trish seconds this notion.

Chris and Trish get back into Chris’ car.  At this juncture, the brake fluid has leaked out completely.  Chris loses control of the car and dies in the accident. Trish lives – feeling guilt and pain for months to come.

Although Derek did not mean to kill his step-brother, he and the others decide they will go to their deaths harboring the secret to avoid getting into trouble.  However, Derek learns that Vicky intends to tell Trish about the accident. Derek threatens all conspirators.

One Year Later: Patrick and Erin call Trish and ask her to spend senior weekend at their summer cabin. Trish accepts and invites some close friends (including Derek and the conspirators).

Although there are reminders of Chris throughout the cabin, the weekend starts off well with a boat ride and libations.  Derek even gives a toast in Chris’ honor. That afternoon, Derek underscores his feelings for Trish, but Trish doesn’t feel ready.  Later that day when the others are preparing for the evening, Derek takes some of Chris’ ashes, pours them onto the ground and urinates on them.  This unleashes Chris’ curse, which immediately begins its vengeance.

Serena (a co-conspirator) is using the toilet and thinks she sees the ghost of Chris.  The ghost rouses several brown recluse spiders, and they attack her on the toilet biting her buttocks.  Serena is rushed to the hospital. AMANDA (innocent) travels to the hospital with Serena, and the others stay behind.  As the night develops, another co-conspirator, Ray, is severely burned while tending the fire. He too sees the ghost of Chris before the flames jump from the fire pit consuming his face.  Ray’s brother, SAM, (innocent) rushes him off in a motorboat in order to get Ray to the hospital faster than if by ambulance. Derek is to care for the remaining girls, Trish and Vicky.

Derek, Vicky, and Trish are all spooked by the horrific events, but Derek sees this as an opportunity to make his move on Trish by comforting her.  Chris’ ghost then causes Vicky to become electrocuted, but only enough to frighten her, not to kill her.

Vicky, seething with jealousy and anger, tells Trish about Derek’s involvement with Chris’ car breaks.  Derek denies this and convinces Trish that he’s innocent. Derek tells Vicky to leave. Now, Derek and Trish have their time alone.  Trish is attracted to Derek, but she cannot bear the idea of betraying Chris by allowing herself to love someone else, let alone his step-brother.

Chris’ curse culminates after Trish succumbs to her desires and kisses Derek sweetly, but passionately.

Chris’ ghost appears and spooks Derek.  He runs out to the driveway believing he hallucinating the ‘prom car’.  Trish is baffled and frightened and follows him outside, but stops short when a DRUNK DRIVER strikes Derek with his car; the driver doesn’t even realize he’s hit someone.  Derek is injured, but not badly. As he comes to, he blames Trish for his actions. If she could have loved him, then he wouldn’t be a monster. Trish runs to the beach – hoping to jump into the water and swim to safety because she knows that Derek cannot swim.  He chases her down on the breaker before she dives in and strangles her to death. As he is strangling her, she grabs a heavy rock and smashes him over the head. He rolls, falls into the water and begins to drown. While Derek drowns to prom music, Chris embraces Trish (who’s now a ghost) and they sway to the music in their own microcosm.

A WITNESS who saw the Drunk Driver has called the POLICE.  He runs down to the the beach and sees the silhouette of the ghosts dancing on the breaker.  He yells out to them but hears back Derek’s cries for help! He pulls Derek from the water and begins mouth to mouth.

At a memorial service for Trish, Trish’s parents, LILLY and MARCUS, request that a portion of her ashes always remain by Chris’ side on the mantle.  The lake was her favorite place and Chris was the love of her life. Erin places Trish’s urn next to Chris’.

DETECTIVE WOOD enters and apologies for interrupting but insists on speaking with Derek as part of the investigation.  He explains that the Witness claims he saw two people on the breakers the night of Trish’s death. Derek explains that after he was hit by the car, he remembers nothing, which is a lie.  Marcus and Lilly ask Detective Wood to leave, reiterating that their son has been through enough.

Back at the station, Wood is beginning to put together pieces of the puzzle.  He starts to map out names, faces and events in a web of photos, arrows, maps, etc.

SERGEANT SARAH MILLS asks Wood about the case.  At this time, she believes Derek is innocent and that Drunk Driver is to blame for this tragedy.  Woods declares “the investigation is open until it’s closed” (The sequel is set up; sweet.)

Trish and Chris’ side-by-side urns on the fireplace mantle of the cabin suggest the case isn’t closed.

Photo by Fernando Rodrigues on Unsplash